Photo: Stuart Millard/RNLI
D838 Dudley Jane, on the day of her arrival in Dartmouth, 10 July 2019

Our D class inshore lifeboat, Dudley Jane, is an inflatable, not a RIB. She is powered by one petrol driven 50hp outboard engine and is capable of being manually righted by the crew in the event of a capsize. The engine is fitted with an electrical start and has a Post Immersion Restart System (PIRS) The crew have to practice restarting the engine of a capsize training lifeboat after it has been deliberately capsized and re-righted.

The D class has night capability, which is a good thing as over 30% of our calls are during the hours of darkness. Navigation lights and a blue flashing emergency light are fitted and a battery powered searchlight can be carried as well as white para-illuminating flares. The crew can also use Night Vision equipment. The D class has modest towing ability but it is common for the Dart lifeboat to be called to vessels over 30ft long and vessels over 40ft can been assisted, depending on the sea and wind conditions.

In January 2018 the station had six helmsmen, nine lifeboat crew and a further six probationary crew. There were also eight launch crew with three additional probationers. All are volunteers.
We are fortunate in having Haydn Glanvill on the crew as a lifeboat paramedic. He spends his life alternating as a paramedic working for the South Western Ambulance Service and volunteering for the RNLI. He has been on the call outs to several of our “lives saved”. The boat is well supplied with first aid equipment and carries an oxygen cylinder. The lifeboat crew are all regularly trained RNLI first aiders.

The pod in the bow is a watertight stowage area where the VHF radio and chart plotter are kept. The GPS plotter eases the task of navigation in a small boat travelling at speed and the hand held radios allow the crew to keep in regular contact with the over-seeing Coastguard Centre, usually in Falmouth.

The boat was built at the RNLI Inshore Lifeboat Centre at East Cowes on the Isle of Wight in 2008. It is planned that she will be replaced with a new D class lifeboat in May 2019. The boat has nine watertight compartments and will remain afloat even if several are punctured in an accident. She is 4.95 m long and capable of travelling at 20knots for three hours at maximum speed although the crew of three, kneeling in the boat, are probably not. 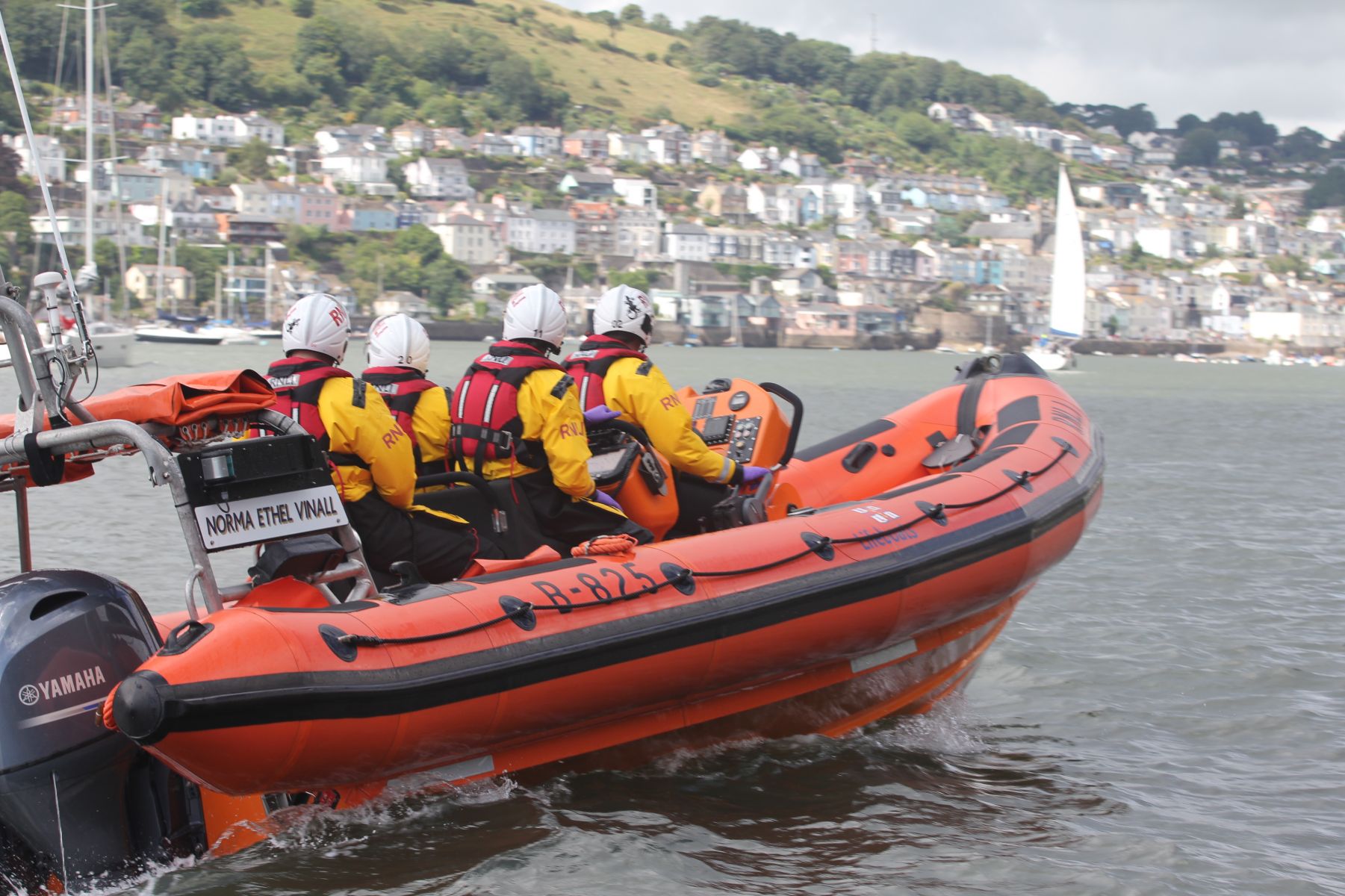 Photo: John Fenton RNLI Dart Lifeboat Press Officer.
B-825 in Dart Harbour on the day of her arrival.

B-794 Joan Bate officially went on service at Dart RNLI on 26 October 2018 for a two year trial. This showed that the sea and weather conditions that the Dart lifeboat has to operate in, as well as the size of the casualties that they are called to, justified the RNLI in placing a B class lifeboat in Dartmouth permanently alongside the D class.

Specifications of the RNLI Atlantic 85 lifeboat.

There are two types of B class lifeboat – the Atlantic 75 and the Atlantic 85 – named after Atlantic College in Wales where these rigid inflatable lifeboats (RIBs) were first developed. 75 and 85 represent the lengths of the lifeboats – nearly 7.5m and 8.5m respectively.

Introduced into the fleet in 2005, the Atlantic 85 is the third generation of B class lifeboat and is gradually replacing the Atlantic 75.

When it comes to racing to the scene, the B class Atlantic 85 lifeboat is one of the fastest in the fleet; her top speed is 35 knots powered by two 115hp 4-stroke engines.

Although she’s an inshore lifeboat, designed to operate in shallower water, the B class can handle fairly challenging open sea conditions too – force 7 near gale winds in daylight and force 6 at night.

The B class lifeboat is ideal for rescues close to shore, near cliffs and rocks – areas inaccessible to our all-weather lifeboats.

The Atlantic 85 is also capable of being beached in an emergency without sustaining damage to her engines.

Most B class lifeboats are launched into the sea from a carriage, with the help of a launch and recovery vehicle such as a tractor. The Dart lifeboat is berthed on an aquadock attached to a pontoon in Dartmouth harbour.

With no wheelhouse on the B class lifeboat, the crew are exposed to the elements at all times and rely on their protective kit to keep them safe and warm.

Many rescues take place at night and can involve being close to dangerous cliffs and manmade structures, or searching caves and crevices.

In addition to night vision equipment, the B class lifeboat carries a searchlight and parachute illuminating flares to light up the surrounding area, helping to keep crew members safe as well as locate those in need of help.

The Atlantic 85 has room for more kit and four crew members compared to three on the Atlantic 75, but both have space for a high number of survivors.

The B class has a manually operated righting mechanism in the event of a capsize which involves inflating a bag on top of the roll bar.

Her engines are inversion-proofed so that they shut down should she capsize and can be restarted after she has been righted.

The RNLI B class lifeboats are built and maintained at the RNLI Inshore Lifeboat Centre at East Cowes on the Isle of Wight It is planned that a new Atlantic 85 lifeboat will be built there in the autumn of 2021 for the Dart station.

Due to Covid-19 the shop is currently closed. We will let you know when we will be re-opening as soon as we are able.